So I thought I would write about my pets. I won't do all of them at once, because, well I just have to many.

We will take the cats first. There are THREE of them. One that is just newly acquired. 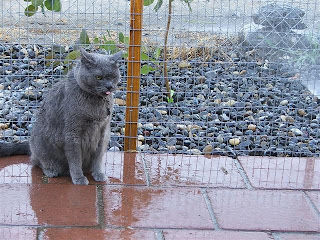 This is Pepper. The matriarch of the family.
I found him between some stacks of lumber where I use to work.
He was just hours old. So I brought him home, and bottle fed him.
He was such an ugly baby that I really had no intentions of keeping him.
But the older he got the cuter he got, and I just fell in love with him.
Since he was a bottle baby, he had to have baths all the time.
He got use to the water, and then the "blow dryer".
To this day, he will sit in the sprinkler and play in the faucets.
He will beat you to the shower waiting for the water to come on.
Then he has to have his daily shot of hot air from the blow dryer. 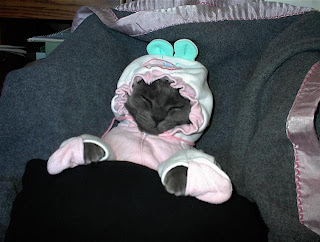 Pepper got use to being dressed up too. I would actually buy 9 month old size clothing for
him and modify them to fit.
Pepper also went everywhere with me! Even to Walmart! Shopping!
When he was a baby, I took him to goodwill and he picked out his own shopping bag.
Yep, and to town we would go. He even learned to duck into the bag
while going through the doors.
Then after he was in the cart he knew it was clear, and he could peek out.
It was amazing the amount of people that DID NOT See him!
But....
We never passed a child that did not notice him!
Then Pepper just got to big for me to take. He tipped the scales at 21 pounds.
Yes, Pepper will be 15 years old this August.
SIMON
Here is Simon babysitting some young'uns, that I bottle fed for awhile. 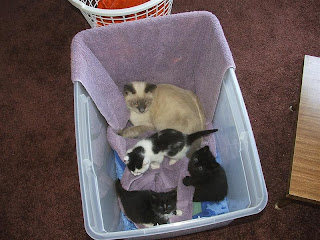 Simon is my SIAMESE that I have always wanted.
He is NOT your typical Siamese though.
He never meows.
He only hisses
He is not a talker 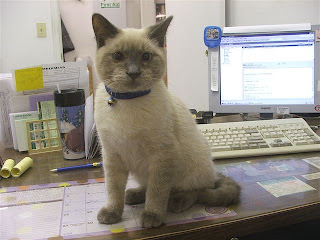 This is the day Simon became de-maled. Poor thing. He looks so pitiful here. 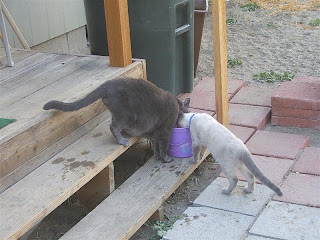 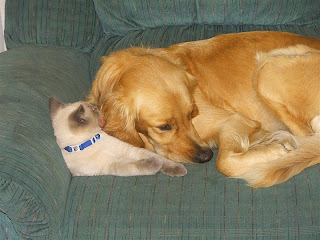 Now, Simon has bonded with Sydney here. He has not bonded with anyone else. Sydney is "mommy" to all baby's in the house.

I don't know, what goes through Simon's head. He does have crossed eyes, and every morning he wakes up in a new world! He will look at me, as if he has never seen me before.
He will not let me catch him, but if I happen to get lucky and pick him up,
he just melts into me, and will even purr if inclined to. 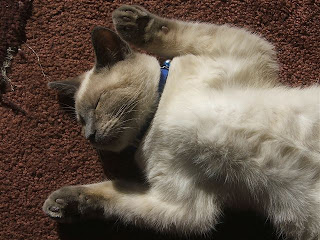 Yep Simon is a different sort of cat!

SCREECH
Here is the latest addition to our cats
BY NO CHOICE OF MINE
Screech found us! 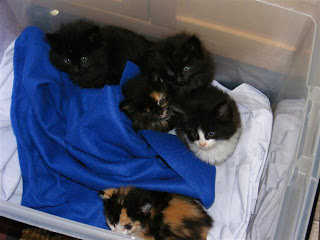 This is the day that Screech and his litter mates found me.
Their mother had gotten ran over on the hwy below us.
Did not know she had a litter of babys.
A week goes by......
Then a friend of mine, and I, were down by the pasture talking.
The sound of our voices brought out 5 tiny babys mewing
weaving in and out of 4 pairs of horses hooves.
Taking them in the house, I got some canned food, and put some evaporated milk
(cows milk is not good for cats)
and ALL five of the babys dove in. Not ever eating real food before, they did
a good job of cleaning up. 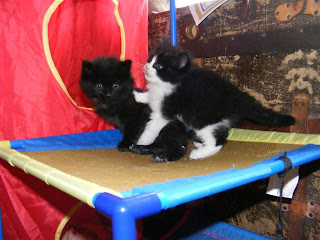 I did find homes for all but Screech, and I think I secretly wanted to keep him.
He also BONDED WITH Sydney! (She IS mother to all baby's)
But Screech also thinks he is a dog!
He lays like a dog.
He eats like a dog.
He runs like a dog.
He Plays with the dogs.
He even (get this) chases the other two cats! 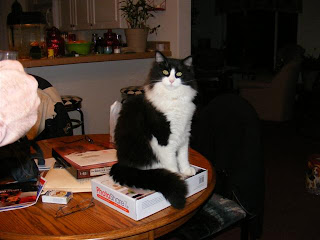 Screech is a neat cat. He is gets into everything,
does not like to be left alone
and just looks for trouble! 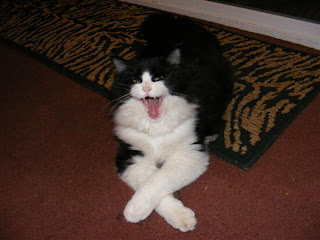 Well those are the boys.
Next time around it will be about the girls, (dogs)
and then the Ladies, (horses)

Hosted by mrscravitz at 4:15 PM

lol!You had me giggling with all your photos and kitty descriptions, especially about Simon. What a silly kitty. And Pepper...in that baby outfit! Too cute! I just want to snuggle him. But wow! He's huge! That's awesome that he's 15 yrs old. It's obvious you've given him such wonderful care.
I'm in love with Screech! I love me some orca colored critters, you know. And his long fur is so luxurious. Love that last photo of him, too. lol!

Thanks for sharing great stuff about your kitties. And thanks for reading about Javalina today, too.

LOL Your cats are hilarious!! They all look like characters, and I just love the crossed eyes there too.

Screech reminds me of a cat we used to know named Wallace. Wally would sneak up on us while we were feeding at dusk/ dark, and attack our legs. He would run up, on his back legs, and wrap himself around our calves. Rotten cat!! Took about 5 years off Dear Husbands life the first time he did that!

Cant wait to meet the rest of your crew~