S.A.F.E.
Save A Forgotten Equine
updated their website.
They lost three of their special horses lately.
One of them:
Brandy
was lost in just about the same way I lost
Poncho! (You can read about it here.)

So I googled:
LIPOMA
and came up with this:
COW
It actually means:
Case of the Week!

Please go visit his blog,
(I am sure he looks at his page views as much as I do.)
I AM going to copy and paste from his blog to here,
simply because I do print my blogs out in a book at the end of the year,
and I would like to have this information in it: 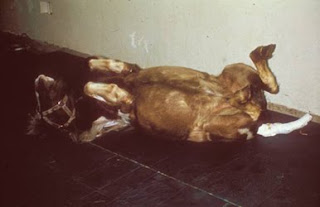 It has been a while since I posted a case of the week (maybe at the rate I’m going it should be case of the month—but then the acronym COM just isn’t as nice as COW). This was an older horse I saw on emergency last week. The history was a sudden onset (less than 2 hrs) very severe colic. In fact when I arrived, the horse was down, in shock and unable to get up. With the assistance of lots of good drugs we were able to get the horse comfortable enough to stand just long enough to do a rectal exam. Rectal exams are probably the single best diagnostic aid we have in sorting out colic’s. On rectal, a very tight band could be felt. This almost always means that something is twisted or displaced.

As it turned out, the cause of this horse’s colic was what is called a strangulating lipoma. They are called that because it is a lipoma that ‘strangles’ off a portion of the intestine. Lipomas are benign tumors of fat. In horses, they tend to form in a very thin membrane, referred to as the mesentery. Lipomas really do not cause a significant problem for the horse until they somehow get wrapped around a loop of intestine- almost always the small intestine. Once they wrap around a loop of intestine, the horse VERY quickly becomes extremely painful. The only way to fix the problem is surgery. Often they wrap tight enough around the intestines that they also occlude the blood flow to that section of intestine. If the circulation to the affected loops is significantly compromised then the intestine quickly begins to die, in which case at surgery the strangulated loop of intestine would have to be surgically removed. That is why, if surgery is to going to be pursued, it needs to happen ASAP. Even if surgery is elected for, sometimes you just cannot get the horse on the surgery table fast enough to save the intestine. On average about half of horses treated surgically survive in the long term.

Strangulating lipomas are so devastating, in large part, because they strike out of nowhere. There is nothing that can be done to prevent them and the only effective treatment is surgery. It is virtually impossible to detect these tumors until they cause a strangulation. The only thing that may lessen the development of these benign fat tumors is to keep your horse from getting too fat. Because it takes quite a bit of time for these tumors to form, they usually do not develop to a sufficient size to cause a problem until the horse is in its late teens or twenties. For reasons we do not yet fully understand, geldings and ponies tend to be at a greater risk for developing lipomas. The only effective treatment for a strangulating lipoma is surgery. Current estimates for an uncomplicated surgical colic are in the $5-7000 range. This type of colic is at a higher risk for post-surgical complications, so they can easily cost in excess of $7,000 to fix.

Here are the life lessons from this case: 1. With any severe, sudden onset colic, a veterinarian should be consulted immediately. In these cases, banamine is rarely ever powerful enough to suppress the severe level of pain. 2. Keep banamine on hand. Banamine is a medication that is quite effective in suppressing pain originating from the abdomen. Often a mild colic can be managed with this medication alone. If the pain does not resolve within 45-60 minutes of an oral dose of banamine, then a veterinarian should definitely be consulted. 3. Surgical costs are expensive and are almost always unexpected. It is wise to have some funds set aside in an emergency fund or have colic insurance. 4. Lipomas are just one more reason to add to the long list of reasons to keep your horse from getting overweight. Even if you do, as in this case, strangulating lipomas can and do still occur. 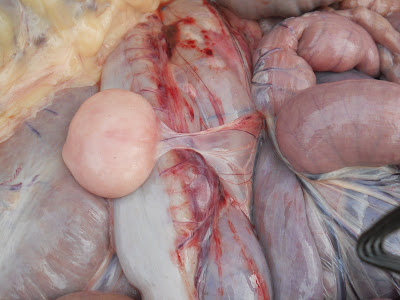 Here is a picture of the distended loops of small intestine that develop as a result of the inability for ingesta to move through. 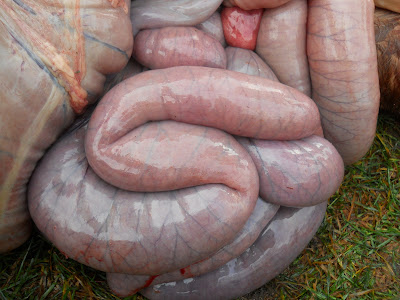 Hosted by mrscravitz at 6:00 AM

Very informative. I believe this is how I lost one of my horses a few years ago. Cisco was in his early 20's and the onset of colic came on so quickly...and yes...I had allowed him to become fat. Lesson Learned. Good Post.