I have been busy!
Busy trying to find out some history on,
"PEDRO"!
Yep that his is name.
I got an email from a gal in Tri-Cities that said she thinks she use to have Pedro.
She described him to me from what she remembers, and the one thing that stuck out,
was he
"KNEW HIS NAME!"
And he does!
He responds to Pedro.
So Pedro it is!

And she said that he would be about 12 years old now.

So Off to the vet we go.
He needs a check up and I needed to know more truth of his age.
Because I don't know what I am looking at when I look at his teeth: 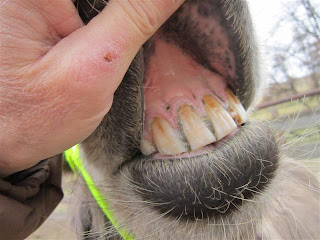 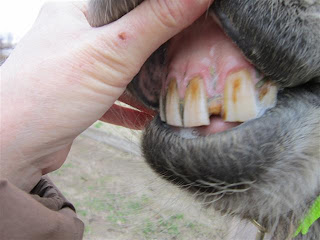 He has a bit of a little tooth here that has offset his teeth. 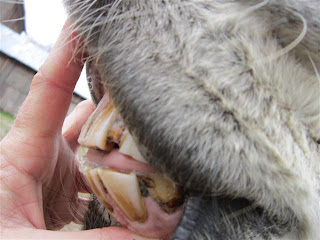 He is very good about letting you look in his mouth.
He needs a good toothbrush.
(Mental note next time I go to the store.) 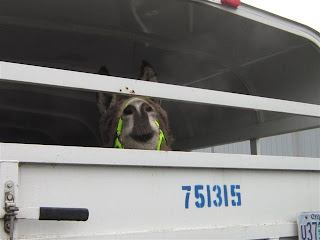 I was not sure how he would load.
When I get to the trailer, he does put his front feet in,
Looks around and backs out!
Then it was a battle of "push-N-pull" which was not working...
So I went and got my light whip,
and had Hubby get in the trailer, and just put a bit of pressure on the lead rope.
I kept tapping him on his back legs right above the knees, and
IN HE GOES!
Now hubby is locked in the trailer with this wild burro!
Rut Row!

Well not really!
Pedro was such a gentleman,
He just crowded Hubby at the door. So hubby had to slide out.

So off to the vet we go.
He rides really good.
Was a good boy for the doc,
Well we just had a little incident where
Pedro let the doc feel down his back leg, and
just when the doc had his fingers in just the right spot.....
WHAM!
Pedro kicked!
Right on target!
He was in the stocks and so therefore the kick
smashed docs index and middle finger pretty good!

It wasn't like I did not warn him!
(I really did feel pretty bad about it.)

Once the doc quit peeing down his leg, and regained his composure,
he continued with the exam.
He said that:
Pedro is:
A good weight.
Very healthy.
One back foot needed to be trimmed.
Teeth needs to be done.
And he was about 10 years old.
YEAH! Good age.

So he got his vaccinations, and will be ready for the booster when Libby and Star get theirs.
And I got a tube of 'Miracle Gel' to give Pedro to get his feet done
so that he would not kick my farrier to the next county.

So on Friday I had my Farrier over.
I explained the case.

She was ready to take him on. So I gave him the meds, and she worked on his front feet.
He has no issues with his front,
and really only a bad issue with one back hoof.

By the time she was ready to tackle it
Pedro was in LaLa Land! 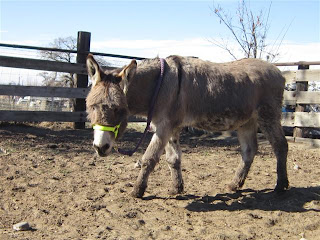 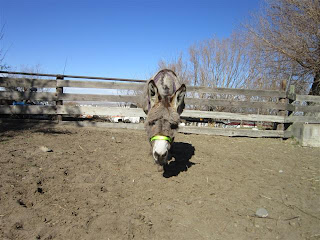 He had not a care in the world! 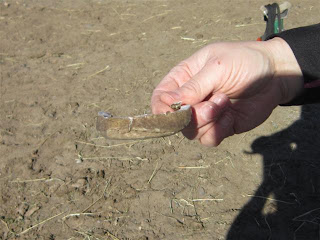 She trimmed twice this amount off the one hind foot.
I am sure that the last two times he got trimmed,
that he kicked who ever did it, and they just never touched that one hind foot.
Now he has them all trimmed nice and neatly. 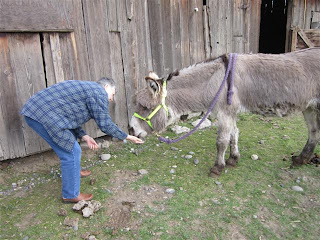 He was pretty out of it for about 6 hrs!
Here he is getting some carrots, and watched carefully so he doesn't choke. 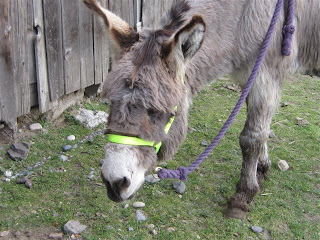 I thought maybe some food might be good.
And then I walked him around a bit too when he wasn't staggering so much.
I could of blown him over with a feather...
My heart broke!
He was so pitiful looking/acting! 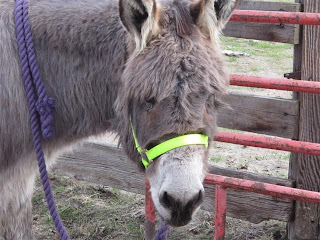 PEDRO: "There is two of you, and your spinning!"

He recovered well, held a grudge for about a day,
and then back to his wonderful, loving self!

He has the most awesome personality!
Very quiet. I have yet to hear him bray!
Star brays quite often.

So today:
It was sunny but it was very cold!

A friend came over because she wanted to meet Pedro.
She is a donkey lover and has shown me quite a bit of things about donkeys.

We take him for a walk, and part way thru, I told her I have a saddle for him.
That was all it took.
Off to the round pen we go! 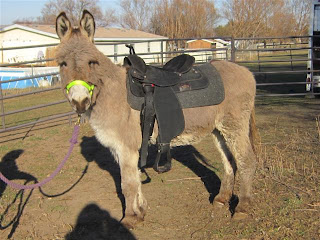 Isn't he just adorable?
Ignore the to long cinch!
Took the saddle and cinching quite well. 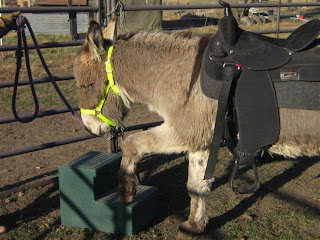 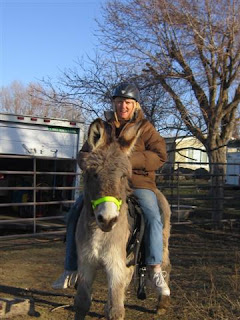 I RODE MY ASS!

My friend rode him first!
She was really brave!

He did so awesome!
Never once bucked.
Even knows the "one rein stop"
Only because I only had one rein, but when I pulled on it, he stopped!

After this, we went for a long walk. 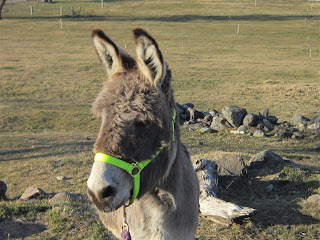 Up and down hill. 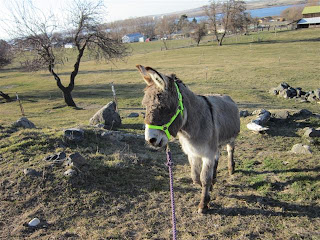 Thru the rocks and over logs!
He will be a good:
"Trail Challenge Donkey!"
I see a
"HORSE SHOW in his future!"

Now to work in getting him a horse disguise made!

Hosted by mrscravitz at 6:46 PM

He's a doll! You got a score there!
I have to get that Miracle Gel for my donkey. Looks like it works good.

I love it, yay Pedro!
The first time we had a farrier come out to do our minis he wanted to roll them over. We showed him to the gate and found a new farrier which is not an easy "feet" when you're dealing with donkeys and double when there mini. That is so exciting that you were able to saddle up and ride and I can't wait to hear about all your adventures this summer when the sun is out!

Oh what a GOOD boy!

It's so awesome that you might have found a former owner!

And Pedro is an adorable name for him! Just PERFECT!

It looks like such fun to ride. I've never ridden an "ass"...ha ha! That sounds so funny!

Maybe when I finally get my land, I'll be able to get a donkey too. I already want a horse, cow, goat, Alpacca...oh I just want a darn farm!

Hi,
visted your blog for the first time, today.
I love the story of Pedro.
He had so much luck to find you.
But he is a really great one.
I hope to read more about him soon.
And I have to read through all your former post, too.

Yay! Pedro is one special guy! You may be riding him more than Lily, eh? So much for finding a friend for Star. Sounds like Pedro will be your friend instead. lol!
He sure looks good under saddle, too. You're going to have so much fun on the trails with him. Are you planning on signing up for some ACTHA rides? you should!