This years hay that is in my barn, is TERRIBLE!
It seems that every year,
the hay I get is worse and worse!
I do not feed alfalfa.
This hay came out of Touchet Washington.
It is full of weeds.
The pale bales are suppose to be sun bleached
but they are more weeds than anything.
And the green bales are on the moldy side.
(I got two ton of 'bleached' hay, and one ton of good green hay)
So feeding is wasting alot of hay. 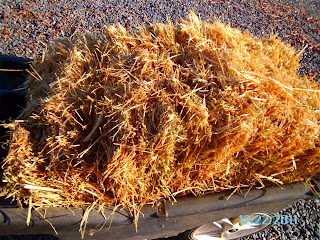 This last bale of hay,
has the weeds that grow rampant in my pasture.
And I PAID for this crap! 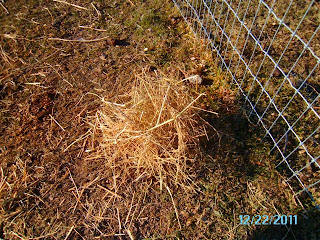 The photo below is all weeds from the morning feed. 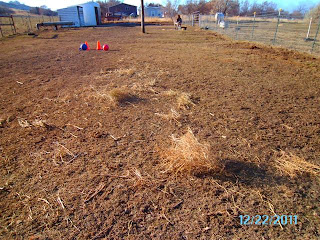 The only good part was:
Libby and Star did not eat the weeds,
and it did have some alfalfa in it.

The bale before this last one,
gave Star and Libby the scoots.
So I fed that to the neighbors cows.
A Whole Freekin Bale!
And when I did that,
BOY OH BOY!
Star charged the fence,
and Libby bucked and rared!
Neither one liked that the "neighbors" were eating their food!
(And of course I did not have my camera to photograph the incident.)

I now have a shadow when I feed.
Star was totally scared of my wheelbarrow when I would go out to feed.
So I let her get closer to it,
Then I let her eat from it.
Now she follows me around.

hah! That's the way to make her your shadow and teach her not to be afraid. Food!
Bummer about the hay. The pale stuff looks more like straw than hay. I'd be mad, too!

Not sure of your circumstances but if possible, I'd be looking to buy my hay some place else. We get ours from a neighboring dairy farm.

I'm lovin' that Star more and more with each Post! :)

Oh I hear this. We've gotten a few bad bales, that look sunbleached like yours. I'm paying $16 a bale for it, it better be green!!
Not to mention, I feed my ponies grass hay, $15 a bale. I fed the other night and one promptly peed right on it. WTH?!! I couldn't believe it! It's nice hay. You don't pee on it!!
Hope you have a very Merry Christmas!!

Just wanted to say....Merry Christmas from Lisa and the entire herd at the Laughing Orca Ranch!!

Now i do know away to not worry about not getting weeds in your hay, and that is..... not having the the animals thus elimanating the problem,Welcome to my world.
LOL.

I pay 3.50 a bale.if I had to pay 15 a bale I would be out of the horse business. I guess living in the country in Michigan has one perk. Can't really ride during the winter...too cold for this southern girl, but wow...15 a bale??? Must be a nice 3 rd cutting of alfalfa

I pay 3.50 a bale.if I had to pay 15 a bale I would be out of the horse business. I guess living in the country in Michigan has one perk. Can't really ride during the winter...too cold for this southern girl, but wow...15 a bale??? Must be a nice 3 rd cutting of alfalfa