We were fogged in all last week.
Mother Nature sure did her job at making everything nice and white! 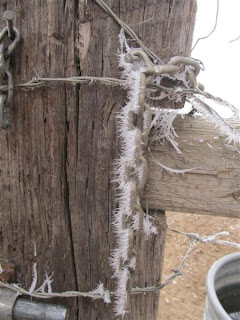 This is frozen cow hair! 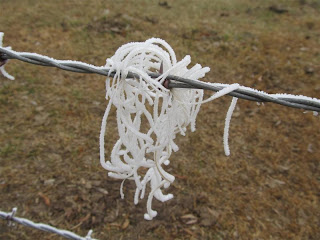 This is frozen baling twine. 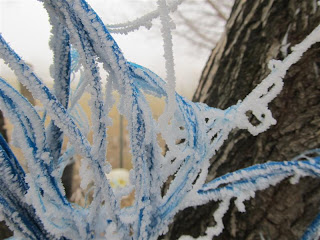 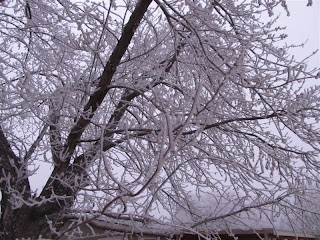 This is my rose. 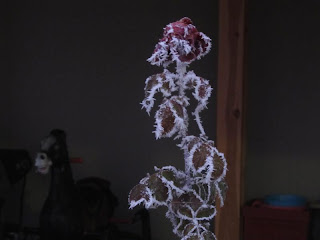 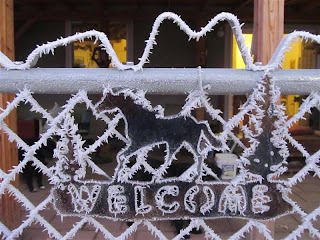 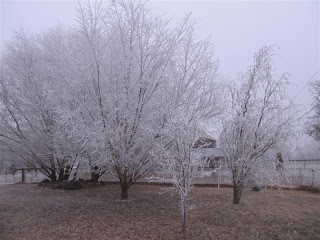 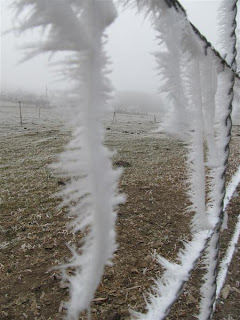 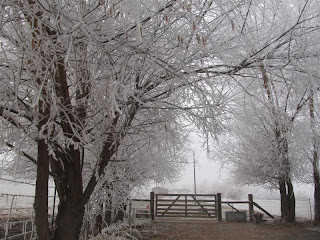 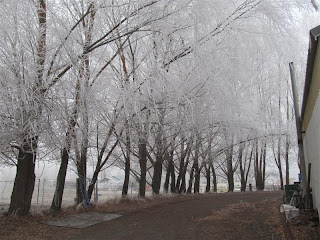 Then last Thursday I after my walk around taking pictures,
I noticed Sydney and Sassy zero'd in on something.
I look at the other side of the fence and I found a little visitor.
Never before have I seen a possum on our property. 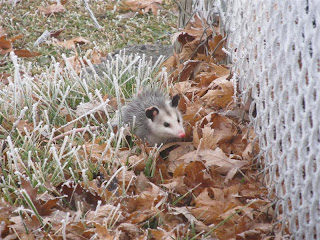 Isn't he just a cute little thing?
I don't think he was well for a few reasons:
He did not run.
He was hissing at the girls.
He let me put a bucket over the top of him.
(Note how close he is to the fence.)
I called fish and wildlife,
they told me to euthanize it and bury it
because they are considered an invasive species!
NOT!
I DON'T THINK SO!
As I was on the phone, I looked out the window
and the girls were back in the corner
and the dirt was flying!

I knock on the window and they obediently come running into the house.
I grab my kitchen garbage can to put the little fella in
so the hubby can do the dirty deed when he got home from work.
As I get closer, the girls beat me to the corner.
I glance and see something in Sydney's mouth!
AAAACK!

They had dug just enough dirt out under the fence so that the little guy
could escape right into their gaping jaws.
I holler and she drops it.

I scoop the poor fella up with grandson's toy rake and put it in the garbage can.
He is still breathing, but very weak.
I don't know if Sydney injured it or not,
but alas, he passed away within the hour.
I felt really bad,
I gave him a proper burial in a sack and put him in the garbage can.

I did read that they are actually good to have around as they eat all kinds of insects and dead animals, like mice and such. But I know their poop is harmful to horses.

Star is settling quite nicely.
The weather has been so cold and miserable that I have not been out with the camera.
She is quite camera shy right now.
But that will change, teehee....

She does let me pet her if I ask her.
Her and Libby do not stray far from each other.

Today after work I opened up the big pasture to let them get some exercise.
Once again, I did not have my camera.
Libby galloped around, kicking and bucking like those professional broncs.
She looked so pretty and awkward all at the same time.

Star thought she was nuts.

Libby did show Star around. I thought that was totally to cute.
The neighbors chickens came into the pasture,
and Star chased them out!
Libby looked at her, and could not believe it.
She thought it looked like fun, and joined in the chicken chase.
No chickens were harmed and they all made it to safety.

Star gives me her feet when I ask her, which is really neat.
She loves back rubs, and neck massages.

This morning when I went out to feed,
she recognizes the food wheel barrow, and does not shy away from it as much,
and I even got a weak, whispered bray this morning.
She sounded like she has laryngitis.
I hope it will get louder.

At least two more months of winter!
UGH!
Before I can start to really get into playing
with my ass, with Star!

I am taking this time to work on gaining her respect, so that by spring time, we can get to work
playing with different objects.

Here is Libby,
Getting off on the wrong foot!

Hosted by mrscravitz at 8:01 PM

Those frozen shots are awesome! I'm glad that Star is settling in so well, and I am especially glad that Libby has a new friend to be with in the pasture.

Jody love the photos and the possum story and the Video is so cute.

The frost images are gorgeous!!!! We have critters here, too, that we are concerned carry various diseases. They take one look at the dogs, though, and make a run for it.