About a month ago
I made some home made fly catchers.
Last year I used Fly Preditors and did not seem to get the desired results with them.
So I figured I would give this a try. 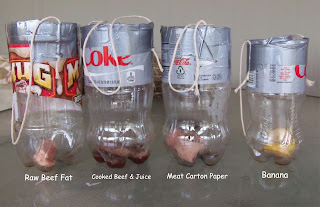 These are New ones I just created. 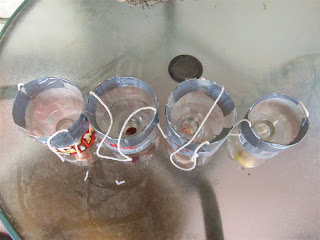 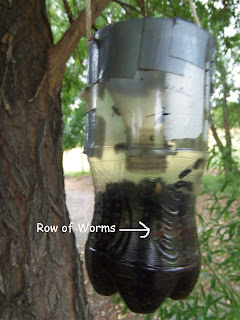 This is the original one I made.
It took about a month for the recipe to ferment enough to get the attention of the flys.
Click here for some recipes you can try. 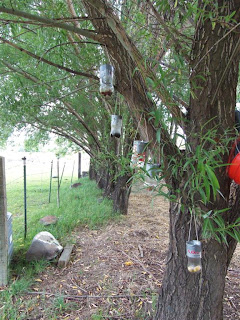 So this time, I just baited them with things that fly's get attracted to in hopes that it will start to draw them in sooner. 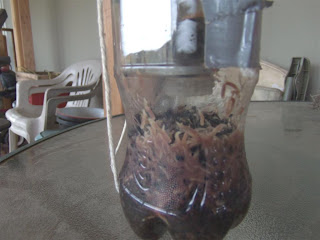 I had poured some bug be gone into the bottle to kill the flys, BUT..then the worms came alive!
YUCK!
I went to show hubby and he sprayed some brake cleaner in there, and the flys died almost instantly.
But the worms kept moving. 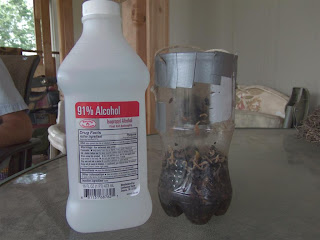 Growing!
Even thriving!
So I added some Rubbing alcohol.
Didn't work. 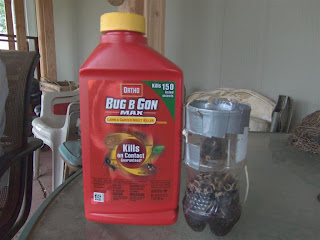 Then I added some salt water.
Hubby thought I would accidentally be creating a bomb .....
THAT seemed to of worked, or else it was a combination of everything. 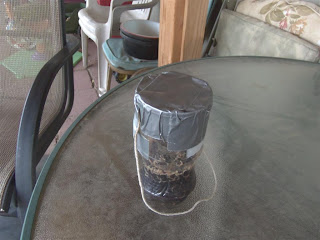 But just in case, I duck taped it all off, just to make sure there
wasn't any escapees.

I made a video of my experieince.

Hosted by mrscravitz at 9:06 PM

Ok, so get straight to the point.

WHAT recipe worked the best? Seeing how you have already done all the trial and error, get to the point!

Also, where did the worms come from?

Your concoctions while trying to kill the worms made me laugh...better than that you made a video of it! L.O.V.E. it!! (0:

Maybe try some acetone (nail polish remover) although THAT might melt the container! But it sure would KILL those worms!

Excellent! The flies have been terrible this year! I really need to do something. I know my chickens would absolutely love those maggots!

For a tip on what to do with the flies after they are caught..
Duck tape the top, and throw the bottle in the freezer! We did this fruit flies, so I am going to make this and do it to these flies.

Thanks for the detailed steps.. Very helpful