A Ride and A Wreck!

The weather finally was good after work to take in a little ride on Libby.
As I was riding, the hubby was fixing sprinklers.
Of course Hubby was wearing a 'BIG RED' scary Jacket!
This was NOT normal in Libby's pasture.
When I ride, I am always fearful of something happening.
Well it did! 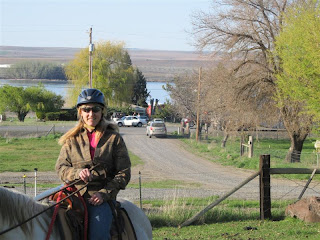 Only it was not to me and Libby.
Here we have a bird's eye view of what is going on,
AND
I saw it happen! 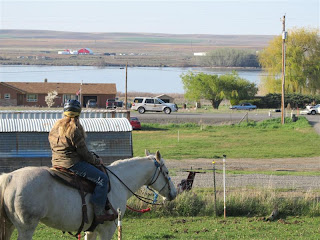 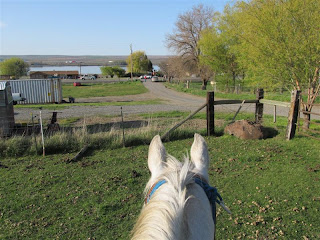 See this truck?
It was stopped at the end of our lane on HWY 730
with a blinker on to turn LEFT,
due to on coming traffic. 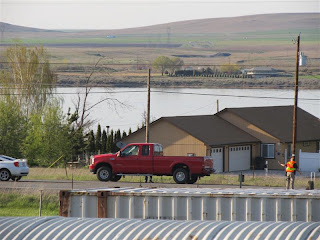 This little yellow car was right behind him.
He went to the right, to pass ON THE RIGHT. 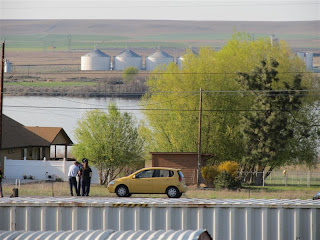 This white car was behind the yellow one...
NOT paying attention! 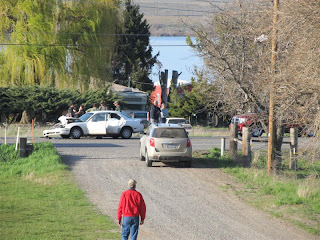 When the driver of the red truck looked behind him,
he saw the white car barreling down hard.
Driver was looking at passenger,
not paying attention to the road.
The truck knew he was going to get hit.
So he stepped on the gas as hard as he could
but it was not fast enough.
Brakes squealed and CRASH!
I Saw it all!
After the crash, people just kept coming out of the car!
There were 5, yes, FIVE people in that little white car,
and they were NOT small people either! 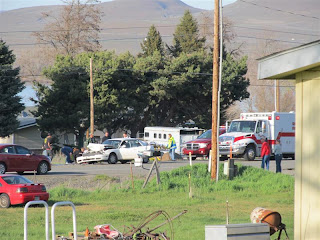 A view from the top of my pasture,
(below)
wreck is in the middle of the picture.
Hwy 730 is the third dangerous highway in the state of OREGON!
There has been meeting after meeting with state employees to figure out what to do about it.
The state has been working on it.
But, It has been 4 years!
Finally about a month ago they had another meeting.
We went to it.
They are going to extend the turning lane to the county line.
Right now, it ends about 3 blocks before our driveway!
When we leave, we have to look to the right to make
sure some idiot is not passing,
because the turning lane just ended
and they are hell bent for election to get somewhere fast!
Then we have to look left for on coming traffic.
Coming home,
it is even more dangerous.
You have to watch for the on coming traffic,
try to judge the distance and calculate the cars behind
you to see if they are all going to stop,
and DIVE for the driveway.
I don't worry to much about the car directly behind me,
it is the car behind THAT ONE, because the state said
that it 'IS LAWFUL' to pass on the right
if there is a car turning left!
The car behind the one that dives to the right to pass you,
does not see that YOU are stopped,
HENCE THE CRASH!
So many wrecks on this road!
So many deaths! 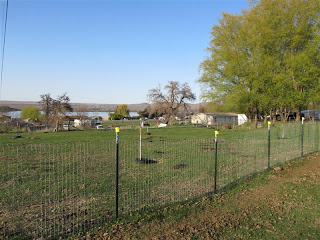 When the excitement settled down,
and the female passenger went by ambulance
to the hospital,
BECAUSE:
she was not wearing a seat belt,
and either there was no air bag,
or the air bag was off or broken,
she did a major face plant to the dash board!
OUCH!
(No one else in the car was hurt!)
The driver and passenger in the pick-up go whip lash.
Libby and I headed back to unsaddle.
To much excitement for the day! 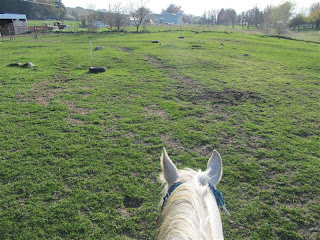 After giving her a good brushing and rub down,
she could not get on the ground fast enough, to roll!
I was slow on the uptake
to get more than just this picture! 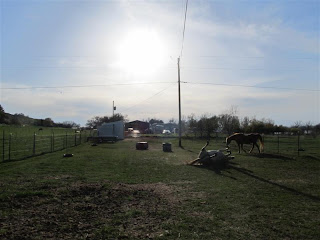 I should of been prepared, because she ALWAYS rolls after a ride! HAHA.

SO, STATE OF OREGON, if you read this:
HURRY UP AND FIX THIS HWY!
PUT UP SIGNS that passing on the
RIGHT, is NOT allowed!
HELP SAVE A LIFE!

Wow, that's a bit nuts. Glad it wasn't you! And I hope you don't ride your horse down that road. That would be scary.

I do have to cross that hwy, to get to the riding trails down by the river. But I GET OFF MY HORSE, and WALK her across the road! LOL..
I sure am glad it was not me too!

So scary! At least no one was killed.

Well I'm just glad that it wasn't you that a had a wreck. Good Libby for not being spooked by all that racket and the scary red coat.

It's a shame it takes injuries and deaths to make the authorities do anything to make roads safer.