There IS peace in the pasture
and everyone gets along just great!
(I just love all three so much!) 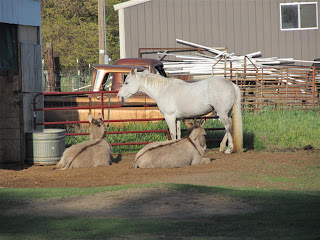 This is usually how I find them.
I know that Libby does get to lay down and rest because
she is usually covered in dirt or shavings.
But this is my most favorite site.

I will sit and just watch those long ears just moving to the noise around them. 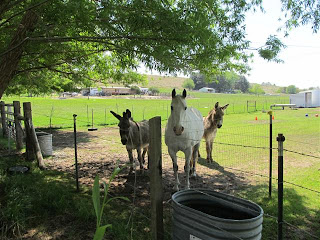 This is my usual morning greeting. 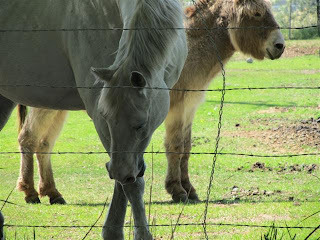 Libby reached to itch, and I snapped a picture.
Turned out pretty neat. 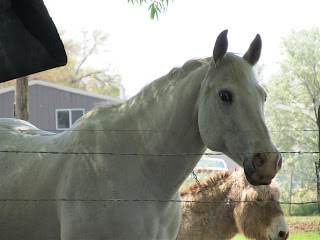 As I stood there taking pictures,
I captured Libby looking at me.
I think she has very expressionable eyes.
Because of the angle of the photo,
She really is NOT that fat, nor has a short neck.
I am actually quite happy with how I have kept her weight down this year.
Having to watch THREE equines weights, is better than just one.

Buddy still squeaks.
He tries so very hard to bray
and all he can manage is a squeak!
Poor thing!

Oh AND Libby is in heat, AGAIN!
And guess what? He really luvvvvsssss Wibby!
And Wibby Wuvs Buddy cause she LET HIM!
Yep so much so that I caught him with his front feet over the
butt of Libby!
(He was aimin' at her leg!)
A little bit off there bud!
Of course, did not have my camera!
He is to short to do anything.
But when Star was in heat all he did was lay his head over her butt.
I told him to help her out, but he wouldn't.

The donkeys are FINALLY Starting to shed.
With temperatures tipping the scale at 90+ degrees today and tomorrow
they should really shed quite nicely.
They don't like to get wet either.
Libby will go stand or graze under a sprinkler,
but they won't.

I have not felt like going out to the pasture lately,
and so they have been neglected! Poor baby's, and of course they sure let me know it too.

But I have brushed them every day for the past few days, and getting quite a bit of hair off them now too. 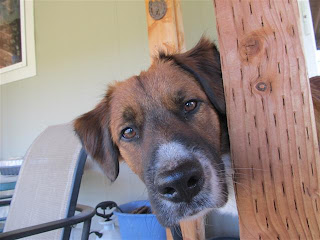 This is Harper, Parkers new play mate.
I think his parents are testing to see how a new sibling will fit in. 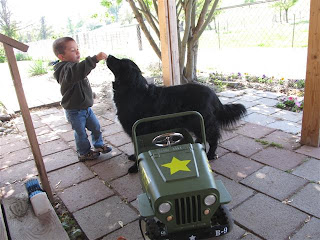 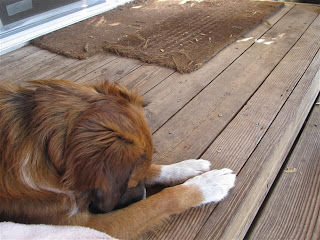 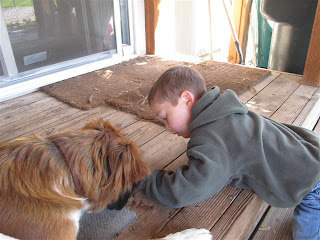 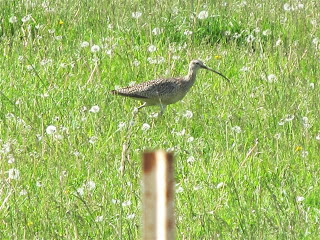 Then there were two! 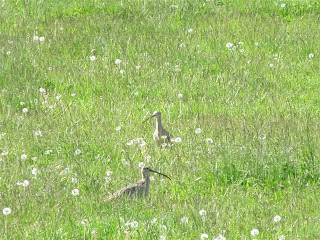 Found out these are Curlews.
One has been showing up for about a week, and just yesterday a second one showed up.
I have not ever seen these before, and they are quite fascinating to watch.
I have been told they migrate from Australia,
They mate,
Mom hatches the young,
Hands them over to dad,
and takes off back to Australia.
When the baby's are old enough, then
Dad and they fly to Australia.
HAPPY MOTHERS DAY!
teehee...
~~~~~~~~~~~~~ 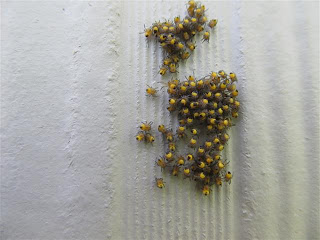 I am still not sure what to do with these young'un's that have hatched
and is all over the front side of my house.
There are MILLIONS!
Yes...
MILLIONS! 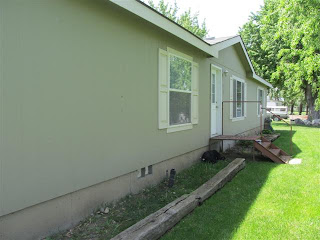 On both sides of my front door! 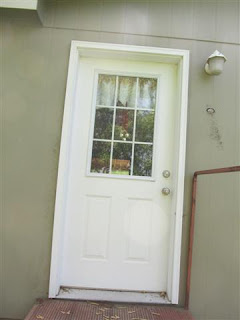 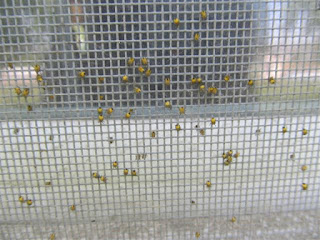 This is my window screen!
UGH!
No opening windows for awhile
cause these little guys crawl right thru those holes!

Below is a red something or other I found.
Not sure what it was, and after it's little photo session,
I squished it!
Left bright red all over the house! 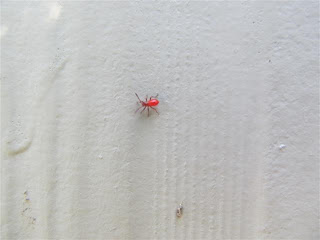 Could be the baby to the adult below.
(If you can find it!)
Look in center of picture.
Does anyone know what kind of flying bug this is? 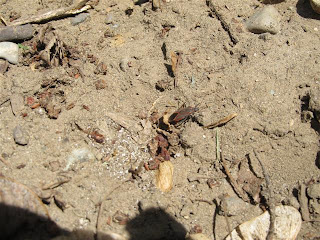 They have been multiplying like mad out here also!
We did spray for them THREE TIMES!
I think they just fly away and come back when the spray is dried up!

~~~~~~~~~~~~~~
Other News:
Three weeks ago,
I caught a cold like no other.
Thinking I was just getting over it,
and feeling pretty good,
THEN...
I got the flu or something,
Slept ALL Day long one day.
Second day, dizzy and just lethargic.
This has all cost me 4 days of sick time in three weeks!
(Yes went to the doc. Yes have been on three different meds.)

What a fun hobby!
Kind of brings you back to the
Pen Pal days...
ONLY
it is just post cards, and I have gotten some really neat ones.
Try it out!

Hosted by mrscravitz at 3:46 PM

Libby and Company are so sweet. :) Love those images. The one you took while she was scratching looks like a ballet pose. :)

Don't they always have a donkey sense as to when you're coming outside. My guys seem to know and are always looking at me through the gate; I love it too! I'm glad they are all getting along, that makes life more enjoyable for you!

Mrs. C, your furry babies are so adorable. I just love reading about them (and seeing their pics).

Wow, those spiders are something. I know they are great for gardens, but YIKES, get off the screen already!

I'm glad you're feeling better. I hope it lasts. Migraines are horrible. I know. I get them EVERY month!

Have a super weekend!